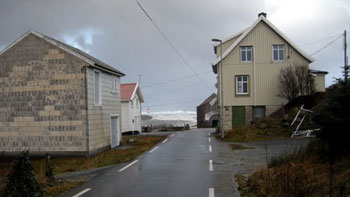 General: coverage and weather:
Above normal temperatures continued with an average of 6.5degC, 2.5degC over the average. Highest temperature was 9.5degC on the 10th, and lowest -1.7degC on the 7th. The total rainfall was 82.5mm. The day with the highest precipitation was the 21st with 23.5mm. The highest recorded wind was 33.1 m/s on the 5th. Overall a dry and stable first week and a windy and wet final week. 50 different species were recorded in December.

Raptors:
Only a few observations of the local White-tailed Eagles and Peregrine Falcons.

Seabirds and waders:
No notable seabird passage days with only singles of Gannet, Fulmar and Kittiwake. A female Goosander was noted on the 1st in Sørevågen and a female Red-breasted Merganser was at the same location in the first half of the month. A female Goldeneye took up residence in Måkeskittmyr from the 9th to 13th. A Moorhen was present at the pools at Skjevika in the run up to Christmas. The two Little Grebes in Nordvikvågen were present throughout the month. A Curlew landed briefly at Fiskholmen on the 15th.

Passerines:
No great numbers of any particular species. The main highlight was a Long-eared/Short-eared Owl seen by locals in the first half of the month. A Black Redstart was present around Siratun and a Waxwing seen briefly at Skare on the 15th. A female Blackcap at a feeding station at Skare from the 24th was joined by a male on the 29th. A minimum of 6 Blue Tit and 5 Great Tit at various feeding stations were a result of the tit passage from October.

Ringing:
2 Blackbirds were ringed in conjunction with taking down of the mist nets on the 15th. The years total ended on 7736 individuals being ringed of 91 species, the best ever ringing year surpassing the 7052 in 2012.

Year ticks:
None new species for the year was seen. The total number of species for 2013 ended on 222.

Also no Local or national rarities were seen.