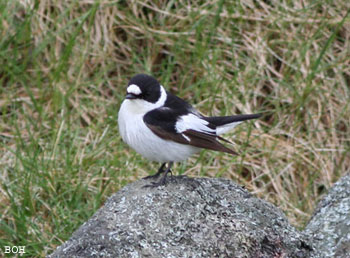 May began with south-west winds, heavy rain and temperatures below average. The first change in weather occurred on the 7th with temperatures of 14degC and then again over 17th to 20th. On the 18th a new May record temperature of 23.6degC was recorded at Utsira Lighthouse weather station.

The Collared Flycatcher and further rarities resulted in good and over average coverage during the period 13th to 20th. There has been good manning of the ringing station throughout May.

Seabird passage has had less coverage when there has been so good birding in the field. The final week of May gave lower winds, finer weather and good falls of migrants. 147 species were seen during the month of May.

No specific passage was noted, but a few days were noted with a good range of species. Only ones or twos of Sparrow hawk and Kestrel early to the middle of the month with a maximum of 2 Kestrels on the 18th. A Rough-legged Buzzard on the 7th.

A new Utsira species in the form of a Black Kite over Varen and Merkeskogen on the 13th.

In the first three days of the month and between 23rd and 26th there was some seabird passage. Late Svalbard populations usually give good passages of geese. 230 Brent Geese passed on the 26th and represents the year’s maximum total. Barnacle Goose were few and far between while 4 rested on the island on the 23rd. A new Canada Goose visited on the 19th. Local breeding Greylag Geese of 20 to 40 had young on the sea by the 9th. A fine male Pintail appeared on the 19th and 20th. Early May resulted in a large gathering of diving ducks with a maximum 370 Common Scoter and 120 Long-tailed Ducks on the 1st. With exception of 53 individuals on the 1st Red-throated Diver passage was non-existent. Three Great Northern Divers were noted the whole of May as was a one Manx Shearwater on the 24th.

Five days in May had calling Corncrakes (17th – 30th). Waders in May have been largely absent with the exception of a Ringed Plover on the 3rd and 19th and ones or twos of Purple Sandpiper and Dunlin. May is usually a good tringa month, however this year not so with few records of Redshank, Greenshank and Green Sandpiper. A Wood Sandpiper on the 21st was the only highlight. Whimbrel were present on a few days, with eight individuals on the 8th the maximum.

Also absent was the number of Skuas - six Great Skua (26th), a few Arctic Skuas and a Pomarine Skua on the 4th. The less regular Long-tailed Skua had two good days with seven individuals passing on the 22nd and 23rd. Otherwise there was a Sandwich Tern in Sørevågen on the 19th, 150 passing Artic Terns on the 25th and a few records of Guillemot, Razorbill and Puffin. 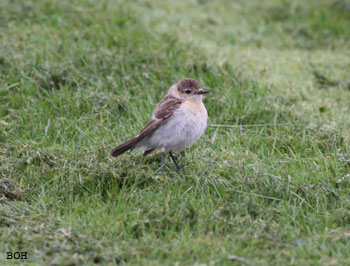 A female Siberian Stonechat in Veito and a flyby Golden Oriole on the 7th were at the start of the first period of decent weather. Golden Oriole in May ended with four records. Red-backed Shrike was well represented from the 7th and with at least 9 individuals on the 18th.

One or two Waxwings toured the island between the 4th and 7th and the Great Spotted Woodpecker from April held out till the 5th. The years first Short-eared Owl appeared on the 9th.

The Collared Flycatcher from the 12th to 18th was popular. The month went from good to magical!

Falls of Spotted Flycatchers resulted in 80 individuals on the 18th, Pied Flycatcher numbered 40 on the 28th, Redstart with a maximum of 20 on the 28th and Icterine Warbler 10 on the 29th. A minimum of five Black Redstart is also noteworthy.

A Rustic Bunting in Austre Plantation on the 27th and a singing Great Reed Warbler on the 29th in Herberg were the other high points of a fantastic May on Utsira.

There was good coverage with ringing on 21 days. A total of 1661 individuals were ringed distributed over 51 species. The most productive day was 17th with 244 individuals of which Willow Warbler (64), Garden Warbler (63) and Pied Flycatcher (13) contributed most to the total.

Notable species were a Stonechat, two Golden Orioles, a Nightingale, Collared Flycatcher, a Thrush Nightingale and a Red-breasted Flycatcher. More regular species of note included a Bluethroat, March Warbler, two Common Rosefinches, Common Crossbill and a Goshawk. The total in May 2013 is a doubling of that from 2012 when in 22 days 858 individuals of 43 species were ringed. 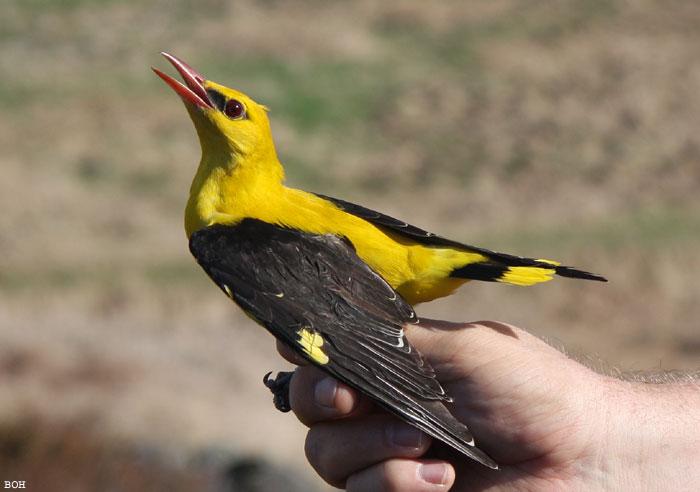 Normally new arrivals of many late passage species in this month. 45 new species in May from first to last with date for 1st registration. Up to 31st May a total of 171 species have been recorded on Utsira in 2013..

Utsiras first Black Kite on the 13th was over the areas around the lighthouse several times.

Utsiras second but first male Collared Flycatcher was at Hovland between the 12th and 18th.

The fourth but first spring Pallid Harrier, a second year bird was in the Araseto area on the 17th and 18th.

The fifth Great Reed Warbler was in Herberg on the 29th.

Seventh and eighth records of Long-tailed Skua were groups of 7 individuals past Pedleneset and Jupevikshojen on the 22nd and 23rd respectively.

The ninth Woodchat Shrike was an adult male in Siradalen on the 19th. 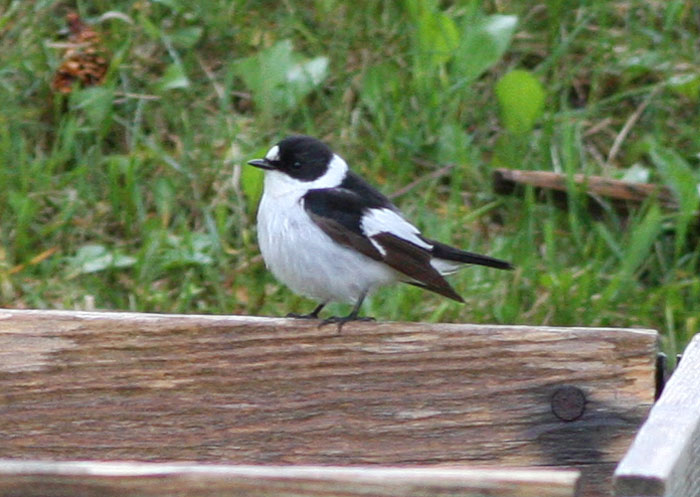 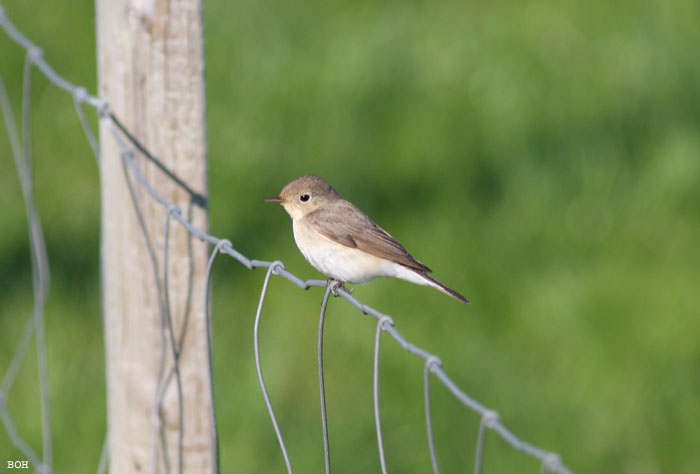 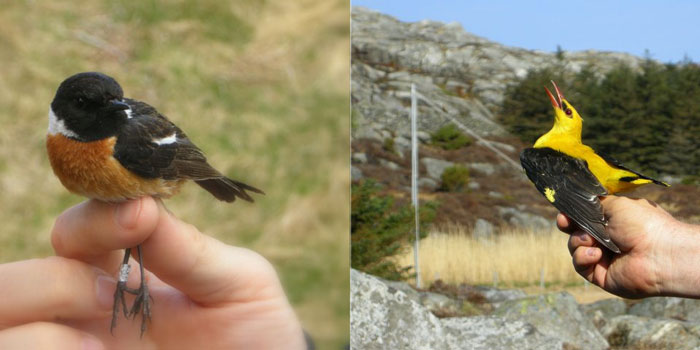