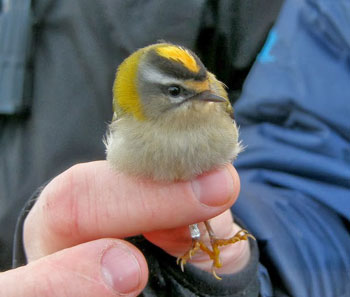 Summary from artsobservasoner.no, ringing data and other written sources for November on Utsira.

General: coverage and weather:
November is a quiet month where the weather decides the bird activity on the island. Higher than average temperatures continued with an average of 7.2degC and 1.1degC over the norm. The highest temperature was 10.9degC on the 16th and 1.7degC the lowest on the 24th.

The most notable weather change was from the SW and NW. the strongest wind at 20.3m/s was on the 11th and maximum rainfall of 20mm was on the 27th with a total of 180mm for the month. No snow or frost was noted when the most significant snowfall in Haugaland came on the 20th. 73 species were recorded in the month.

Raptors:
Normally there are only a few records of raptors following the passage birds and overwintering birds.

A mega rarity in the form of a young Golden Eagle appeared in the west from the 2nd to 5th.

White-tailed Eagles were recorded daily with between one and four individuals. Sparrowhawk were noted daily with up to three birds up until the 6th, and further singles towards the end of the month. A large Goshawk was stationary between the 21st and 27th; otherwise there were the local Peregrine Falcons.

Seabirds and waders:
No notable seabird movements; an adult Whooper Swan was present on the 21st to 23rd. Surprisingly there were few geese with only the local Greylags numbering between 7 and 9. A Wigeon was present in Måkskittmyr from the 14th to 23rd and two Mallard there on the 23rd. A female Goldeneye from the 9th to 23rd was the only notable diving duck. The two Little Grebes from October were present throughout November.

Two Jack Snipes were noted on the 17th. A Water Rail was in Merkeskogen on the 4th whilst another individual was present in Veito from the 18th to 22nd. There was no large number of Lapwing with only singles until the 18th apart from 4 on one day. Woodcock were well represented through the month and with a new autumn maximum of 12 on the 4th. 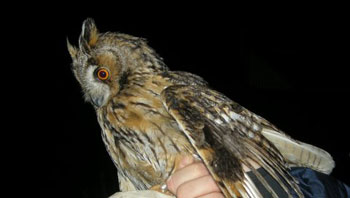 Passerines and others:
Long-eared Owl has been noted in previous autumn and winters, however the bird on the 22nd represents the latest ringed bird. The tail end of the Great-spotted Woodpecker invasion resulted in 1 to 2 individuals until the 21st, with 4 individuals ringed during the month. Female-type Black Redstarts were noted at a few localities with a minimum of 4 birds between the 4th and 26th. Two to five Waxwings were noted between the 4th and 6th. Only three days with singles of Mistle Thrush between the 4th and 14th; otherwise the best ‘thrush’ day was on the 4th when there were 500 Fieldfare, 200 Redwing and 300 Blackbird.

The years final Yellow-browed Warbler was on the 9th in Merkeskogen, whilst the 12th Firecrest for Utsira was at the same location on the 6th, also being the latest autumn record. Red-breasted Flycatcher were noted with two birds, a bird ringed on the 12th and an unringed bird on the 18th. Both were in Herberg, and the latter bird is Norways latest record. 2 Long-tailed Tit were noted on the 6th, whilst there were records of both Blue Tit and Great Tit after the October rush. Otherwise a single Bullfinch until the 7th, four Goldfinches on the 18th and a Hawfinch were also noted.

Ringing:
Ringing in Merkeskogen took place on 16 days where 1008 individuals were ringed of 28 species. The most productive day was the 2nd with 330 individuals of which Mealy Redpoll (237), Blackbird (57) and Lesser Redpoll (17) were the most prominent species. As many as 17 Two-barred Crossbills were ringed on the 4th. Most noteworthy ringing records were the Firecrest, Long-eared Owl, Yellow-browed Warbler, Yellowhammer, 4 Sparrowhawk, Treecreeper, 6 Arctic Redpoll and 29 Woodcock. Ringing in November was well above last year total when 10 days of ringing resulted in 263 individuals of 10 species.

National and local rarities:
The first Golden Eagle in modern times and fourth for the island – 23 years since the previous record. The 12th Firecrest and the latest Red-breasted Flycatcher.

Here is a photo the young Golden Eagle taken by Isak Grimsby: 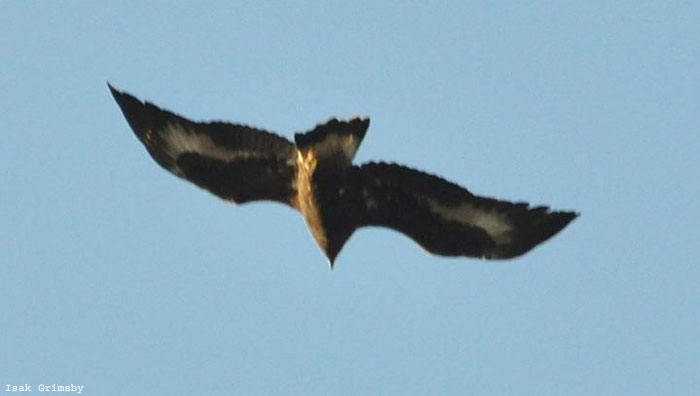 As many as 17 Two-barred Crossbills were ringed on the 4th - here a nice male: